Yesterday we had a ball, literally! After going 3-3-3 on Tuesday we went and got stuck into it yesterday – ending up with the final figures of 11-10-10!

The day started off with a nice bait ball where we released a nice (for the far south coast) black of around 130kg and four striped marlin, things were looking good!  The day continued on with high hopes as we disappeared from the main group of boats and we continued on racking up the numbers! Sitting with 5 fish for the day at 4pm we elected to keep fishing then disaster – we missed our first (and only) fish for the day on the switch, never mind – continue on regardless!
The afternoon was something special – we found the holy grail racking up 5 more fish in just a touch over an hour to see us making tracks home at nearly 8pm. Ending up with a total of 9 striped marlin and 1 black marlin – a day that will be remembered! (and a nice record for us to try and beat)

Well worth it to say the least! We had some of the most awesome surface action I’ve ever seen with multiple fish on balls and some of the best bites you will ever see in your life right at the back of the boat. The bite here at Bermagui has been excellent all week with plenty of boats getting multiple fish each day and we are only expecting it to get better as the month rolls on. 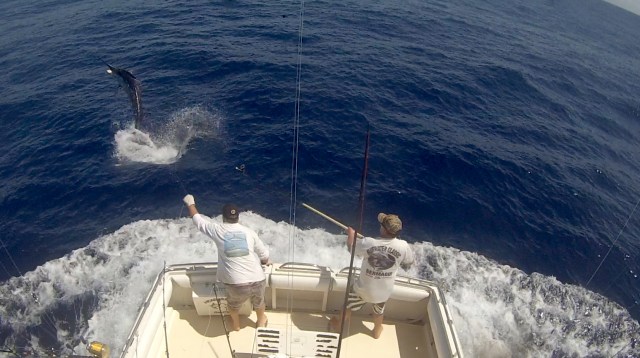